Though we may still have six more weeks of winter – according to some prognosticating ground squirrels – I believe that we should look past this, and focus instead on the bright things ahead in 2018.

For Skidompha Library, 2018 represents not only the debut of our first full season of programs for the whole family, but also comes with the expectation of another summertime Community Read Event, the excitement of live performances thanks to our partnership with River Company Theater, and participation in a timely national discussion. 2018 is already being heralded as “The Year of the Woman” for political and social reasons, but it also represents a very significant anniversary in the story of the women’s suffrage movement. 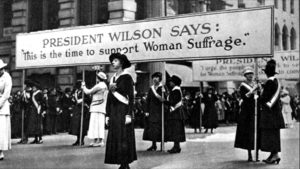 After more than 80 years of protests, parades, outreach and argument, the 19th Amendment to the Constitution, mandating that voting rights could not be restricted on the basis of sex, was brought before the House by President Woodrow Wilson. It would take another two years for all 50 states to ratify the amendment and make it law, but it was the tipping point that made women’s rights more of an inevitability. As we prepare to join the national celebration in 2020 of women’s right to vote, this year we will be highlighting women authors, women in history and great women thinkers of the 19th and 20th centuries. Keep an eye out for upcoming events such as a celebration of the 200th anniversary of Mary Shelley’s novel “Frankenstein,” the 150th anniversary of “Little Women” by Louisa May Alcott, and a very special event for the release of the forthcoming movie adaptation of “A Wrinkle in Time,” by Madeleine L’Engle. (Remember Harry Potter Day last year? Well, hold onto your tesseracts! We’re at it again!)

Have a great week,