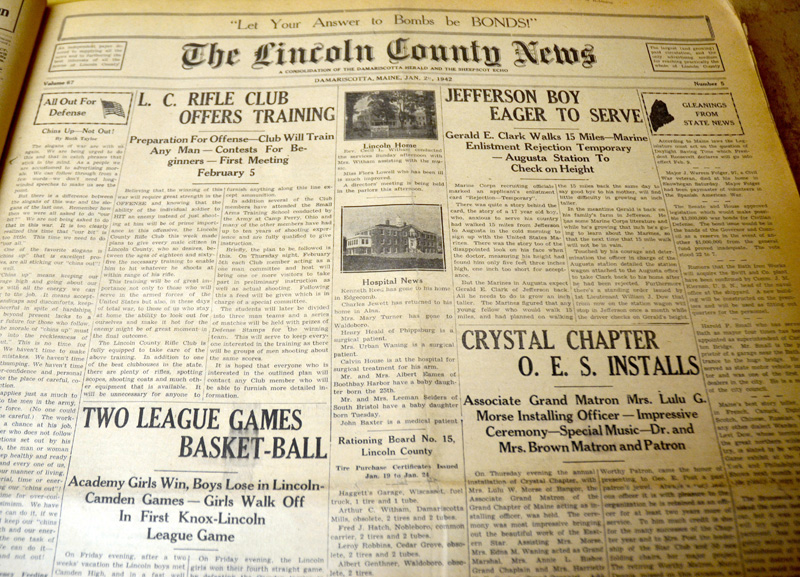 The front page of the Jan. 29, 1942 edition of The Lincoln County News. The newspaper and Skidompha Library are partnering in an effort to digitize the newspaper’s full archive and make it available to the public. (Maia Zewert photo)

Skidompha Library recently received a $30,000 grant for a digitization project that would make the complete archives of The Lincoln County News available to the public online for the first time.

The project received the grant from the Burns Family Foundation to fund 60 percent of the estimated $50,000 cost.

“They are wonderful people, huge supporters of the community, and they truly understand the area and the importance of this project,” Torie DeLisle, director of development and programs for Skidompha Library, said.

Currently, the LCN archives from 1942-2007 are available in hard copy only at the newspaper’s office in Newcastle. Archives prior to 1942 exist only in hard copy in a climate-controlled room at the Lincoln County Courthouse, but little to no public access is possible due to the documents’ fragile condition.

A digital archive exists from 2008 to the present day, however, only editions from mid-2016 to the present are readily available to the public at lcnme.com.

Lincoln County Publishing Co., which publishes The Lincoln County News, had been searching for a way to preserve the archives and make them available to the public.

“We’ve spent a lot of time researching many different ways to preserve what we have, but we ran into stumbling blocks with scanning and storing” the archives, Chris Roberts, president of Lincoln County Publishing Co., said.

The partnership between LCN and Skidompha for the project began almost a year ago, when DeLisle met with LCN Editor J.W. Oliver to discuss introducing “Skidompha Skoop,” a new column from the library. During the meeting, Oliver offhandedly mentioned the newspaper’s need to relocate the archives from the courthouse due to space issues.

“It got me thinking that this might be something that the library could help with. It was such a great fit,” DeLisle said. “So when I got back from the meeting, the first thing I did was ask Kathy (Maclachlan, Skidompha’s staff genealogist) what her thoughts about a project like this would be and she was just beside herself at the thought.”

For Maclachlan, the digitization of the newspaper’s archives would “be the single greatest help to the area” with regard to genealogical research. While vital records and census data can provide some of the facts of an ancestor’s life, a searchable digital archive of the newspaper would help provide context and “give flesh to the bones of families’ stories,” Maclachlan said.

“On a weekly basis, I say how much easier certain research would be if we had access to this. It’s going to have such an impact,” Maclachlan said. “This is so important to our understanding of ourselves and where we belong and where we’ve come from.”

“Having some interest in genealogy myself, I think that’s going to be the number one use. This is a Lincoln County-specific archive with a lot of information about local families,” Oliver said.

In addition, the archives contain curiosities and other valuable information that will become easily accessible, Oliver said.

A group of people were recently in the LCN office searching the heavy bound volumes of newspapers for a piece of information in a column about St. Patrick’s Catholic Church.

“They were in here for days, and they eventually found it,” Oliver said. “Now you’re going to be able to do that with a couple of clicks.”

Skidompha Library agreed to raise funds for the project.

“We’re very grateful to Skidompha for taking an interest in the project and taking the lead on fundraising,” Oliver said. “We looked at ways to do it ourselves and there was no way to pay for it. The equipment is expensive, it would take an incredible amount of manpower to do it ourselves, and as a for-profit company, we aren’t in a position to fundraise.”

“Without the combined efforts with Skidompha Library, it would not have been feasible for us to take on the financial burden,” John Roberts, associate publisher of The Lincoln County News, said.

The digitization of the archives is included in the library’s fall fundraising campaign and will be the focus of a series of events in 2019, including a “through the ages” ball and a newspaper fashion show, DeLisle said.

Once all funding for the project has been secured, the archives will be sent to Advantage Preservation in Cedar Rapids, Iowa, a firm that specializes in the digitization of old newspapers.

DeLisle said she would like to complete fundraising by the end of 2018 in hopes that the archives will be digitized and available for use in 2019. She said her goal is to ship the archives by Christmas.

After the digitization is complete, the archives will be made available in three ways: to LCN subscribers on lcnme.com, to library members through the library website, and to anyone who visits the library on the library’s computers.

The physical archives will return to Lincoln County Publishing Co., at which point the company will decide where to store them, Chris Roberts said.

Both the newspaper and library are enthusiastic about providing the years of archives to the community.

“Like much of the community, our family has been here for multiple generations,” John Roberts said. “It’s important to preserve the legacy of the newspaper that has served the public for over 140 years.”

To support the digitization of the LCN archives and give to Skidompha Library’s fall fundraising campaign, go to skidompha.org or call the library’s development office at 563-1940.