Chats with Champions: The trouble with the Browntail Moth starts with the caterpillar 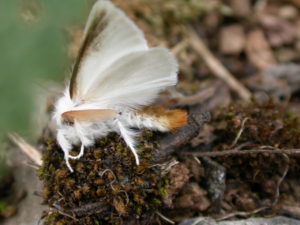 On Thursday, April 12 at 10 a.m., Skidompha Library and Chats with Champions welcomes South Bristol expert on pest control, Bob Emmons, who will speak about the Browntail Moth and its hazards to humans.

The Browntail Moth was accidentally brought on nursery stock to Massachusetts from its native Europe in 1897, and soon after spread to the rest of New England, New Brunswick, and Nova Scotia. The ‘problem’ with this insect derives mostly from the fact that it is armed with defensive, barbed hairs–throughout its life cycle but especially in the very hairy caterpillar stage–which break off and, for many people exposed to the hairs, cause skin rashes, headaches, and even difficulty breathing. The caterpillars have a huge host range of plants that they feed on.

Bob Emmons was a professor for 31 years at the State University of New York campus in Cobleskill, New York. He taught in the Agriculture School and specialized in Integrated Pest Management, a discipline that emphasizes using environmentally friendly practices to minimize pest problems. He is also the author of a textbook on turfgrass management. Awards he received include the SUNY Chancellor’s Award for Excellence in Teaching, The United States Department of Agriculture’s Certificate of Merit, and the Distinguished Service Award from the Golf Course Superintendents’ Association of America. He and his wife Holly, also a former professor at Cobleskill, live in South Bristol. Bob is on the board of both the South Bristol and Skidompha Libraries. You can hear his humorous talks on Skidompha Library’s Owl Radio station and see his previous Chat presentation on Skidompha’s YouTube channel.

Chats with Champions is a free community offering from your national award-winning Skidompha Library and is sponsored by Sherman’s Maine Coast Book Shop. For more information call 563-5513.