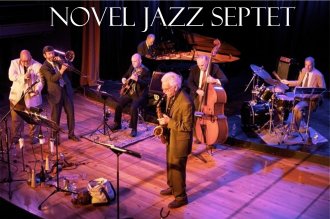 2018 ELLINGTON AND STRAYHORN CONCERT SERIES— The Novel Jazz Septet will be in concert at Skidompha Public Library on Fri 10 August, 7PM, featuring music of the iconic Duke Ellington and his equally iconic musical collaborator, Billy Strayhorn. Novel Jazz is a Maine-based group, now in their 14th season of concerts around Maine and New England. Their mission is to share the music and stories of these two giants of jazz who wrote some 3000 compositions over their musical careers, two percent of which represents the well-known standards and 98% of which most have never heard. They’ll perform standard tunes from the Ellington/Strayhorn repertoire plus newly arranged compositions that they have unearthed in the Ellington Archives of the Smithsonian Museum of American History in Washington D.C., some of which have not been heard in decades. The band has rearranged these pieces for the septet, dusted them off and given them a 21st century sound all of their own. The band features Barney Balch (trombone), Michael Mitchell (trumpet), David Harris (reeds), Herb Maine (Bass), Bill Manning (drums), Dave Clarke (guitar) and Mickey Felder (piano). Call 207-563-5513 or www.mainejazz.net for more information.